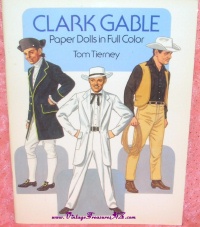 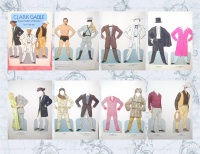 ***”He was the undisputed ‘King’ of Hollywood stars - the handsome, devil-may-care, rough-mannered hero whose reign as filmdom’s leading man spanned more than 30 years. Now Clark Gable’s legendary career - one that included over 70 films - is recaptured in this exciting, full-color cutout book created by noted illustrator Tom Tierney. The magnetism that attracted generations of film fans continues to charm young and old alike in this exciting collection. Three full-colored paper dolls and 32 meticulously rendered outfits from 26 films recall great roles from Gable’s celluloid past... ”

Total Number of Pages: 32 pages total, 18 of which are printed pages

Total Number of Color Plates Pages (printed on one side of each page only): 16

Total Number of Paper Dolls: Three (3) (three of Clark, with the BONUS of Carole Lombard also being depicted in one of the Outfits)

EXCERPTED INFO: “...from his first featured part as a Western ‘heavy’ in ‘The Painted Desert’ (1931 to that of the aging cowboy in ‘The Misfits’ (1961). Costumes from other films include sophisticated evening wear from ‘Possessed’ (1931); safari garb from ‘Red Dust’ (1932) and ‘Mogambo’ (1953); the famous pajamas from his Academy Award-winning role in ‘It Happened One Night’ (1934); a period costume of a British naval officer from ‘Mutiny on the Bounty’ (1935); and several from the star’s most famous role - that of Rhett Butler - in ‘Gone with the Wind’ (1939). Costumes from that role include formal attire with top hat, white tie and cape; bedroom clothes featuring a deep pink robe; and a stylish dress suit, complete with cravat and vest. Clark Gable fans, movie buffs and paper doll enthusiasts will be delighted with this captivating and easily affordable collection - a full-color tribute to the movie-idol magic of one of the screen’s most beloved and enduring stars....”

*It Happened One Night (1934) - Costume by Robert Kalloch

*Across the Wide Missouri (1951) - Costume by Walter Plunkett

*The Tall Men (1955) - Costume by Charles LeMaire or William Travilla