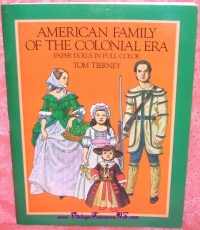 ***“...Spanning three generations, an American colonial family of eight - grandparents Samuel and Hannah; parents John and Prudence; and children Benjamin (18), Sarah (15), Ruth (6) and Thomas (2) - is shown in period attire in a variety of situations as they live out the drama of the American Revolution and its aftermath. In this newest addition to the Dover paper doll series, distinguished fashion illustrator and author Tom Tierney brings to bear his tremendous illustrative ability and extensive knowledge of period costume. These 32 authentic, full-color costumes are further enhanced by the author’s well-researched and scrupulously accurate text. Together they offer fashion and costume historians a precise, full-color view of prevailing fashions and trends of the late eighteenth century. Paper doll enthusiasts of all ages will delight in these finely rendered figures in typical Colonial raiment, while aficionados of Americana will follow with rapt attention this sartorial record of one family’s progress through pre- and post-Revolution to a final frontier expedition. ”

Total Number of Pages: 32 pages total, 18 of which are printed pages

Total Number of Color Plates Pages (printed on one side of each page only): 15

***The first group of costumes (Plates 4-6) will dress the family in traditional working-class garb. Working-class clothes were made of coarsely woven fabrics, often homespun, and were devoid of embroidered buttonholes, ruffles, lace and other embellishments. In color, the garments were generally drab; brown was the most easily obtained dyestuff during this time. Many German immigrants settled in the Hudson Valley, Pennsylvania, the Carolinas and Virginia, imparting a German influence to the clothes. Throughout Europe, farmers had worn the smock for generations; they brought it with them to America and it was common throughout the land until after the Civil War. Farmers’ wives and daughters wore shorter skirts to facilitate their work

***The second group of costumes (Plates 7-9) changes the dolls into a middle-class family during the Revolution. Although a few militia companies had uniforms, the chief uniforms during the early years of the war were smocks and hunting clothes; regiments from different areas were distinguished by different colors. Regarding women’s clothes, by the time of the American Revolution, the sacque or “Watteau” gown (worn by Prudence in Plate 8) was old-fashioned in Europe; however, owing to the cost and scarcity of imported silks and fancy fabrics, American women nursed their dresses into extended service through the end of the Revolutionary War. American women defied Mother England even before their men did. To raise taxes, the King had decreed that though Americans could grow flax and wool, spin and dye it, the fibers must be shipped to England to be woven into cloth and then sold back to them. In defiance, women wove their own cloth, and it is said that the first drumbeat of the Revolution was the “bump-bump” of the women’s looms

***In Plates 10-12, the family is dressed in the garments worn by the upper-middle class near the end of the Revolution. The bright colors and fine fabrics and trims used to make the women’s clothes reflect the return to happier times. At this time in Europe there were rumblings of a revolution in dress. The Macaroni Club, a group in England comparable to today’s jet set, took fashion to the extremes of silliness, including outsized buttons and buttonholes, large cuffs, skin-tight breeches and silly little hats. It was this fashion that brought on the parody of Yankee Doodle - “put a feather in his cap and called it macaroni.” These fashions filtered through to America and adaptations were worn by the men as shown in Plates 10-12.

***In Plates 13-15, the family has separated after the Revolution. Samuel has entered politics and become a judge, and the younger couple are moving west to establish a land claim. For traveling by wagon, the children and women usually walked alongside while the men drove the teams. Few clothes but the ones they wore were taken, and those had to be practical and durable