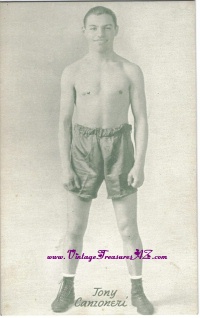 ***Shipping is always discounted for multiple purchases that can be safely packaged together! Simply contact us in advance of purchase for invoice shipping price adjustment .***

"Tony Canzoneri accomplished more in the ring as a teenager than some fighters do in an entire career. Canzoneri fought for world titles in two divisions before he turned 20 and at the age of 22 was already a two-time champion. By 23, he was considered the best fighter, pound-for-pound, in the world. Canzoneri participated in 259 title-bout rounds and became boxing's third three-division champion. He turned pro in 1925 at the age of 16. He fought to a drew with Bud Taylor for the vacant NBA bantamweight title in 1927 and lost a rematch to Taylor in June. But by October, he won his first title, outpointing fellow Hall-of-Famer Johnny Dundee to win the featherweight crown. In November 1930, Canzoneri knocked out Al Singer in 66 seconds, the quickest ending to a lightweight title bout ever. That set up his showdown with junior welterweight champion Jackie "Kid" Berg. Both titles were at stake and after Canzoneri scored a third-round knocked he walked away with two title belts and the mythical title of best pound-for-pound fighter in the world. He reaffirmed that title by beating reigning junior lightweight champ Kid Chocolate to close out the year. Canzoneri lost the junior welterweight title to Jackie Jadick in 1932 but held both titles simultaneously again before finally losing them to Barney Ross in 1933. He beat Lou Ambers and Jimmy McLarnin in non-title bouts before losing the lightweight title Ambers in 1936. Canzoneri was knocked out by welterweight contender Bummy Davis in 1939, the final fight of his career. It was the only time he was knocked out. While he achieved much success early in his career, Tony certainly stood the test of time. He met 18 world champions and six Hall-of-Famers in a 15-year career"