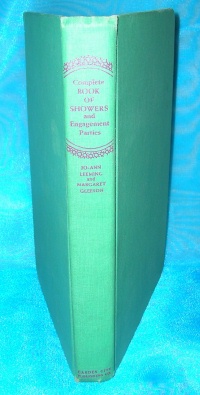 By: Complete Book of Showers and Engagement Parties by Jo-Ann Leeming AND Margaret Gleeson

Book Condition: Excellent (closer to Near Mint) - refer to description for detailed information

***EXCERPTED FOREWORD: “No form of party is nicer or more enjoyable - for hostess, guest of honor, or guess - than the shower.  Its very nature is one of intimate homeyness and warm friendliness.  Also it is the easiest and most satisfying of all forms of entertaining, if it is properly planned in advance.  No form of party is more fun to plan than a shower.  First, a shower is a party for near and dear friends, the people you like most to be with.  Second, it offers the deep gratification of doing something for someone you love.  Third, it is an occasion for intimacy, fun, and informality.  And fourth, it offers free play for the originality and imagination of the hostess.  Needless to say, there are certain forms and conventionalities to be observed, but there are no basic rules or procedures to be followed.  The purpose of this book is to stimulate and suggest ideas and not to lay down unbreakable laws or formal patterns.  The information and suggestions in this book are flexible and adaptable.  The Complete Book of Showers and Engagement Parties is designed to help the hostess who wants to honor a friend with a shower and who wants new and different ideas.  The parties described here are actual original parties given by successful hostesses in all parts of the world.  Although they are presented as complete parties, there is no reason why the alert hostess may not borrow from this one and that on and add her own ideas to evolve something entirely new and fresh.  The authors of this book hope to reveal new horizons to the hostess who is not satisfied to follow where others have led but who enjoys the thrill of creation along with the inner satisfaction of true hospitality.  In addition, this book is designed to help also the honored guest and the other guests, since the shower is more intimate and co-operative than any other kind of party.  The suggestions included here are the answers to the questions that are most frequently asked about showers.   For the engaged girl, all the necessary formal steps in connection with the engagement are included as well as numerous unusual suggestions for making the announcement at an informal party.  The hostess who plans a Bridal Shower usually comes under one of two classifications.  Either she is a close friend of the bride-to-be, and will give one of her first and most essential showers, or she wishes to entertain the prospective bride but must do so after a number of showers have already been given.  In the second case the aim of the hostess will be toward originality as well as practicability.  With this in mind, the bridal showers have been so arranged that those which are better known appear in the first part of the section, with the more novel ones immediately following.  There will also be times when it will be desirable to entertain both the bride and groom.  For instance, if the engaged couple is one of a group of couples who customarily spend their leisure hours together, another couple may well play host and hostess at a shower for both the bride and groom-to-be.  Several suggestions for showers of this type will be found in the last part of the section.  Although showers are usually thought of in connection with brides-to-be, other kinds of showers are also treated: stork showers; the shower for the new mother; wedding anniversary showers and showers for elderly couples who may be starting housekeeping anew in a small place after their children have married; showers for newly married couples; the bon voyage shower for the new minister, a delightful and practical custom in many small communities.  The gift check lists for brides and for babies are meant to be practical and suggestive.  Each day new items that are both useful and ornamental appear in the magazines and newspapers and on store counters.  The authors sincerely hope that the ideas and suggestions in the pages that follow will be of real, practical help to anyone who plans to give or attend a shower and to the engaged girl and her family during the happiest and gayest period of her life.  Naturally this book is not the work of one or two people.  It represents the work and the experience of many whose ideas have gone into it...”*

Condition: Excellent (closer to Near Mint)

***PART I - ANNOUNCING THE ENGAGEMENT.

1 - Something under Your Hat

6 - All About the Big Robbery and Holdup!

7 - A Hearts and Flowers Centerpiece

8 - A Case Worth Investigating

*GAMES FOR AN Announcement

-How Affectionate Are You?

-Hints for the Hostess, the Guests, and the Honor Guest

-For a Newly Married Couple

-For a New Minister

*USING THE SEASONAL MOTIF FOR SHOWERS

8 - A Glass and Plastics Shower

32 - Another Bride and Groom Shower

*WHAT TO GIVE THE NEW BABY

*A STORK SHOWER FOR THE EXPECTANT MOTHER

***PART VI - CHECK LIST OF THINGS THE BRIDE WILL NEED

-For the Linen Closet

-For the Glass Cupboard

-For the Silver Drawer

*COLD DISHES.  Chicken and Almond Mousse.  Star Aspic.  Ham and Eggs Gelee (this should be made the day before the party).  Jellied Tuna-Fish Loaf

Book Condition: Excellent (closer to Near Mint) - refer to description for detailed information