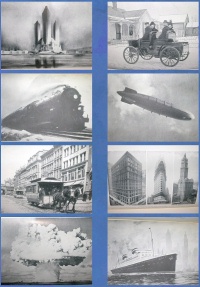 By: March of Democracy by James Truslow Adams

Book Condition: Near Mint - refer to description for detailed information

***Shipping is always discounted for multiple purchases that can be safely packaged together! Simply contact us in advance of purchase for invoice shipping price adjustment .***

Main Title of Vintage History Books:   The March of Democracy - A History of the United States

***This listing is comprised of the first six (6) volumes of this ongoing “set”, with individual titles as follows:

*Volume I/Volume 1/Volume One - The Rise of the Union

*Volume II/Volume 2/Volume Two - A Half Century of Expansion

***EACH VOLUME IS LAVISHLY ILLUSTRATED THROUGHOUT!

Years of Publication (Copyright Dates): ca. 1951 (per reference in Volume VI to a Volume VII in Set, which is NOT a part of this Set) -

Edition: Each volume is a 1st/First Edition

Condition:   Mint/Like New (they even feel amazingly like new to the touch, with covers and bindings remaining as tight and crisp as if they’d never been opened before)

II - THE COLONIAL SYSTEM TAKES FORM: New England Makes Progress. The Dutch and the Quakers. The New Country Becomes the Hope of Many Races. Administration in New England

III - THE DUEL WITH FRANCE: The Three Main Currents of Events. War Between France and England in America. The Beginnings of Conflict with England

IV - AMERICAN LIFE IN 1763: Our Early Social and Economic Life. Our Early Houses and the Arts. Education and Religion. Other Forces at Work

V - THE INSOLUBLE PROBLEM OF THE NEW EMPIRE: The Indian Problem. The Storm Breaks. The Difference in Political Ideas. Ferment in New England. The First Continental Congress and the First Conflict at Lexington

VI - THE REVOLUTION: The First Battles of the Revolution. Washington Takes Command. Some of Washington’s Difficulties. A Book Is Published. The Declaration of Independence. Washington’s Movements. Burgoyne Is Defeated. The Plot of Benedict Arnold. Cornwallis Surrenders.

VIII - THE NEW NATION GETS UNDER WAY: Washington Is Inaugurated. Hamilton and Jefferson. Our National Finances. Our Troubles with France and England. Washington Declines to Be a Candidate. Adams Is Chosen President

*The Signing of the Declaration of Independence

*The Arrival of the Englishmen in Virginia

*The Wren Building as It IS Today

*Reprint of the Original Tract on the Conversion of Indians, Written by Roger Williams in 1643

*Title-page of the First Edition of Anne Bradstreet’s Poems

*Title-page of a Letter Denouncing Leisler and His Followers

*The Oath of Allegiance to King William and Queen Mary

*Indian Trade - A Facsimile of a Broadside

*An Advertisement for a Runaway Slave, 1752

*An Advertisement of Cargoes in Vessels Out of Virginia

*In the Vieux Carre, the Old French and Spanish Part of New Orleans

*An Advertisement of a Sale of a Shipment of Liquor, Capers and Anchovies, 1752

*Advertisement of the Brigantine Jane Carrying Passengers and Freight, 1748

*Two Interiors Preserved in the Boston Museum of Fine Arts

*Isaac Royall and His Family

*Announcement of the First Appearance of the Hallams in America

*Mrs. Hallam as “Marianne” in “The Dramatist”

*The Earliest Building of the Boston Latin School

*A Page from Jonathan Edward’s Freedom of the Will

*The Beginning and Ending of Two Letters from Dickinson’s Letters of a Farmer, Published in London in 1768

*British Troops Landing at Boston in 1768

*The Able Doctor or America Swallowing the Bitter Draught

*Map Showing General Battleground of the Revolution and the Line Established by the Quebec Act, 1774

*A Broadside of 1775 Denouncing Patrick Henry and His Followers

*The Fight on Lexington Common

*The Battle of Bunker Hill

*Handbill Sent Among the British Troops on Bunker Hill

*The Evacuation of Charleston by the British, December, 1782

*Two Favorite Songs, Made on the Evacuation of the Town of Boston

*The Title-page of Paine’s Common Sense

*Facsimile of Washington’s Oath of Allegiance

*Map of the United States After the Treaty of 1783

*The Triumphal Arch Which Greeted Washington on His Entry into Trenton on April 21, 1789

*Obverse (turned) and Reverse of Twelve-Shilling Note of the Colony of New Jersey, March 25, 1776

*Paper Money Issued by Congress in 1779

*A Third Bill of Exchange

*A Cartoon Comparing American and French Liberty in 1789

*The Burning of John Jay in Effigy

*James Madison, fourth President, an author, and a defender of the Constitution

*James Monroe, fifth President and last of the Virginia dynasty

*Abraham Lincoln, unequalled in his love for his people, unsurpassed in their esteem and idealization of him

*Grover Cleveland, the only President to be defeated, then re-elected

*Theodore Roosevelt, our most versatile President in accomplishments and in interests

*Woodrow Wilson, our great leader in the World War, expressing most forcibly the hopes and ideals of our country

*The Expulsion of the Quakers from Massachusetts, 1660

*A Model of the Overshot Water Wheel in the John Winthrop Mill, New London, Connecticut

*The Surrender of Fort William Henry to Montcalm in 1757

*The Burning of the Prudent and Capture of the Bienfaisant in Louisbourgh Harbour, 1758

*Abercrombie’s Army Embarking at the Head of Lake George in and Expedition Against Ticonderoga, July, 1758

*The College of Philadelphia Before the Revolution

*The Parlor of the Powell House in Philadelphia

*The Evening Mail - Travel by Stagecoach on the Boston Post Road

*Otis Protesting the Writs of Assistance

*The Signing of the Constitution in Independence Hall, Philadelphia, 1787

*Washington Arriving at the Battery, New York, Prior to His Inauguration

*Daniel Boone Leading a Group of Pioneers Through the Cumberland Gap

I - JEFFERSONIAN DEMOCRACY: Sectional Characteristics. Our Architecture, Roads and Education. Life in the West. The Issue Between Hamilton and Jefferson

II - THE PRESIDENCY OF JEFFERSON: Jefferson, an Able Administrator. We Come Into Possession of a Vast Territory. Complications Abroad

III - THE WAR OF 1812: The Northwest Territory and the Indians. We Declare War with England. The War at Sea. The War in the South

IV - THE ERA OF GOOD FEELING: Antagonism Develops Between North and South. The West Develops. Our Banking System. Relations with Our Neighbors. The Presidential Election

VI - THE NATION IN MID-CENTURY: Beginnings of a Huge Development. Great Changes in the Country. Glorious Era of the Clipper Ships. Movements for Emancipation of the Spirit. Some of Our Writers in South and North. Education and the Arts

VII - A DECADE OF EXPANSION, 1840-1850: The Slavery Question Becomes Acute. Some of Tyler’s Difficulties. The Burning Question of Texas. War with Mexico. The Election of 1848

VIII - THE INEVITABLE CONFLICT: Clay, Calhoun, and Webster. The Lull Before the Great Storm. “Uncle Tom’s Cabin.” The Republican Party Formed. The Slavery Question in Kansas. The Campaign of 1856. The Douglas-Lincoln Debates

*The Vision of Youth and the Full Strength of Manhood

*Advertised Sale of an Estate in Connecticut to Anticipate Foreclosure

*An Advertisement of a Theatrical Performance of 1788

*An Advertisement in The Pennsylvania Packet and Daily Advertiser, 1788

Gowns of the Presidents’ Wives

*A Cartoon Showing Jefferson, Assisted by Satan, Pulling Down a Column Representing the Federal Party

*Part of a British Political Song on the Embargo

*Proclamation of April 19, 1809, Announcing the Withdrawal of the Orders in Oouncil to Take Effect in June, 1809

*The Capture of the Java by the Constitution

*The Death of Tecumseh in the Battle of the Thames

*A Cartoon of the Hartford Convention

*A Cotton Plantation in the South

*Advertisement of the Mail Stage Running Twice a Week from Montgomery to Fort Mitchell, Where Connections Were Made for Milledgeville

*Cleveland, from Corner of Bank and St. Clair Streets

*A Cartoon Comparing Conditions Under Free Trade and Protective Tariff

*Cartoon of the Downfall of Mother Bank

*Pittsburgh and Allegheny from Coal Hill, 1849

*Map Showing Trails to the West

*In the Woods at Brook Farm

*Stolen Kisses in the Fifties

*A Sale of Horses Announced in Verse Form

*First Appearance of Jenny Lind in America, at Castle Garden

*Charlotte and Susan Cushman as Romeo and Juliet

*Facsimile of Programme of Edwin Booth’s First Appearance on the Stage at the Boston Museum, September 10, 1849

*Facsimile of a Grand-Opera Programme of 1847

*An 1840 Campaign Promise Which Was Recalled in the 1844 Campaign

*Pend d’Oreille, a Jesuit Mission in the Rockies, 1862

*A Cartoon from The Ohio Coon Catcher After Polk’s Election

*The First Capitol Built by the Republic of Texas

*A View of San Francisco

*Post-office at Pike and Clay Streets, San Francisco, at the Time of the Gold Rush

*View of Chicago as Seen from the Top of St. Mary’s College

*Facsimile of the “Biglow Papers”

*A cartoon of the Campaign of 1848, Representing Taylor’s Candidacy as a Result of His Mexican War Campaign

*Announcement of an Address at Ashby, Massachusetts, in March, 1851, on the Fugitive Slave Bill

*Map showing How United Staets Grew from Coast to Coast

*One of the Ships in the Perry Expedition, March, 1854

*A Broadside of a Call for Delegates to a Free State Convention at Big Springs, Kansas, 1855

*Pioneers - The Opening of the Prairies

*The Ceremonies at the Purchase of Louisiana by the United States

*The First Voyage of Fulton’s Clermont

*Sir George Cockburn, Rear Admiral of the Red, and One of His Majesty’s Lords of the Admiralty

*Tecumseh and Harrison at the Council at Vincennes in 1810

*The Constitution Escaping from a British Squadron off the Capes of the Chesapeake, 1812

*The Impressment of American Seamen

*The City of Washington

*The Britannia, the First Cunard Liner to Cross the Ocean

*Star of the South

*”Earth”: The Discovery of Gold in California, and the “Forty-niners”

*”Art,” the Handicraft of the Indians

*Negro Minstrels of the Powhatan

*First Japanese Treaty Commission Sent to the United States in 1860

I - WAR COMES AT LAST: The Election of Lincoln. Southern States Secede. Lincoln’s Inauguration. The War Begins. The Advantages of the South. Disasters of the North

II - THE TRIAL BY COMBAT: The Three Major Operations. The Monitor and the Merrimac. Lee and McClellan. The Emancipation Proclamation. Gettysburg. Grant Assumes Command. Sherman’s March to the Sea. The Fall of the Confederacy

III - BEHIND THE LINES IN WAR TIME: Effect of War on North and South. The Riots in New York and Elsewhere. Financial Difficulties. Land and Agriculture. Prosperity in the North. Education and the Arts. The Gettysburg Address. Conditions in the South. Difficulties in the South. Influences from the Conflict

*Extras of The Charleston Mercury and The Abbeville Banner Announcing Secession

*Part of the 6yh Maine Infantry After the Battle of Fredericksburg

*The Joy of Europe at Secession - A Cartoon

*A Proclamation Issued by Major-General Sandford of the Union Forces in Virginia, May 25, 1861

*A Proclamation Issued by Governor Smith of Virginia, Probably in 1861

*Draft of the First Page of a Letter from Mason and Slidell to Captain Wilkes, After Their Capture

*Map Showing Where the Civil War Was Fought

*Grant’s Letter Tendering His Services to the Federal Government

*The Bombardment of “Island Number 10" in the Mississippi

*Coming into the Lines

*Map Showing Battle-Fields in the Eastern Theatre of War

*A Washington Despatch in The Charleston Courier, September 11, 1862

*Excerpts from Horace Greeley’s Letter in The Tribune, August 20, 1862

*President Lincoln’s Response to Greeley’s Letter in The Tribune

*Fall in for Soup - Company Mess

*General Howard’s Letter of Recommendation of A. R. Waud

Book Condition: Near Mint - refer to description for detailed information