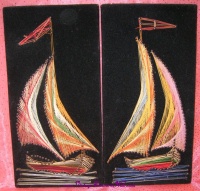 ***Each vibrantly multi-colored work of embroidery thread string art is offset against a background of black velvet, with two (2) different sailing vessels being portrayed

Ready for hanging, these nautical-themed charmers will make a delightful addition to any room in one’s home or office..

Excerpted Research Information:   “String art is characterized by an arrangement of colored thread strung between points to form abstract geometric patterns or representational designs such as ship’s sails, sometimes with other artist material comprising the remainder of the work. Thread, wire or string is wound a grid of nails hammered into a velvet covered wooden board. Though straight lines are formed by the string, the slightly different angles and metric positions at which strings intersect may give the appearance of Bezeir curves (and often construct actual quadratic Bezier curves). Other forms of string art include Spirelli, which is used for cardmaking and scrapbooking, and curve stitching, in which string is stitched through holes.

String art has its origins in the ‘curve stitch’ activities invented by Mary Everest Boole at the end of the 19th Century to make mathematical ideas more accessible to children. It was popularized as a decorative craft in the late 1960s through kits and books.”

Manufacturer/Identification/Markings:   No attribution is present.

Condition:   One picture is in excellent condition, with its mate being in very good condition. The threads on both pictures retain stunningly vivid coloration, and neither picture exhibits any loss of nail heads. One of the pictures is missing one section/row of thread to approximately eight nails along the lower one-third left portion (as part of the ship’s body), but this thread loss is so nominally noticeable as to almost have gone completely undetected by us. Though a few threads here and there on the accent sections (e.g. the flags) exhibit some breakage at the ends, they still remain wrapped around the nails, and the threading on the main portions of both pictures (the sailing sheets/sails) are all intact and tautly in place.